Journeying north from Yucaipa, we drove through the corporate fruit basket of the west. Mile after mile of orchards – mostly oranges, lemons and olives. Just add water to California’s famed golden hills and it turns into big ag’s version of the Garden of Eden. We stopped in a small village outside of Sequoia National Park, Three Rivers, California, named for the convergence of the three forks of the Kaweah River. We camped beside the North Fork of the Kaweah at Sequoia Ranch RV Resort.

Fisherman On The North Fork Of The Kaweah River 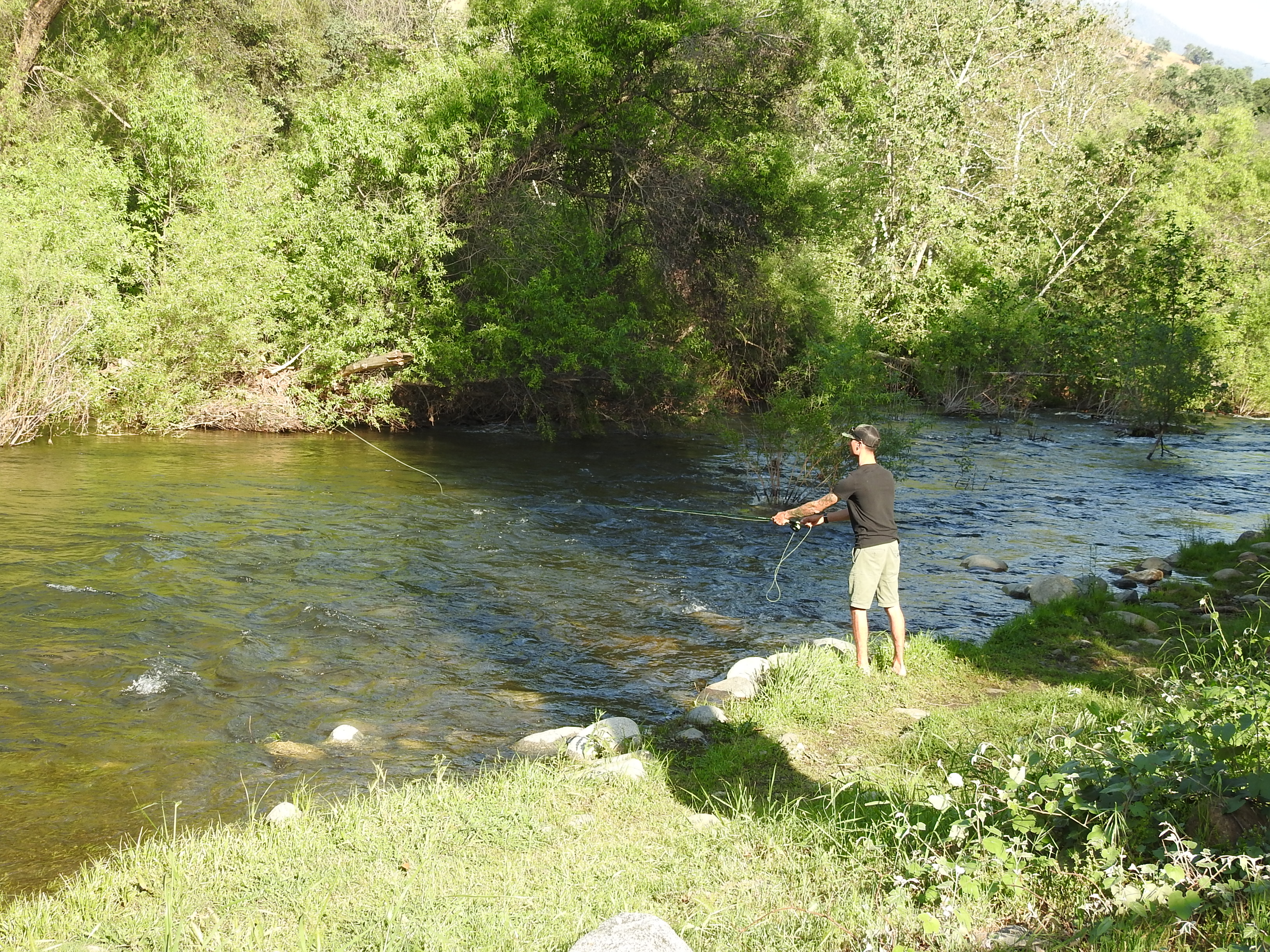 This charming park was shaded with Valley Oaks, sycamores and western cedar. The campground was lousy with  Acorn Woodpeckers taking advantage of the bounty of Valley Oak acorns. You don’t think of woodpeckers as being noisy birds until you are awakened to the sound  of over a hundred of them Ker-racking to one another at first light. I’m pretty sure Ker-rack translates as “stay away from my acorns, Redhead.” But hey, we were here to see trees. 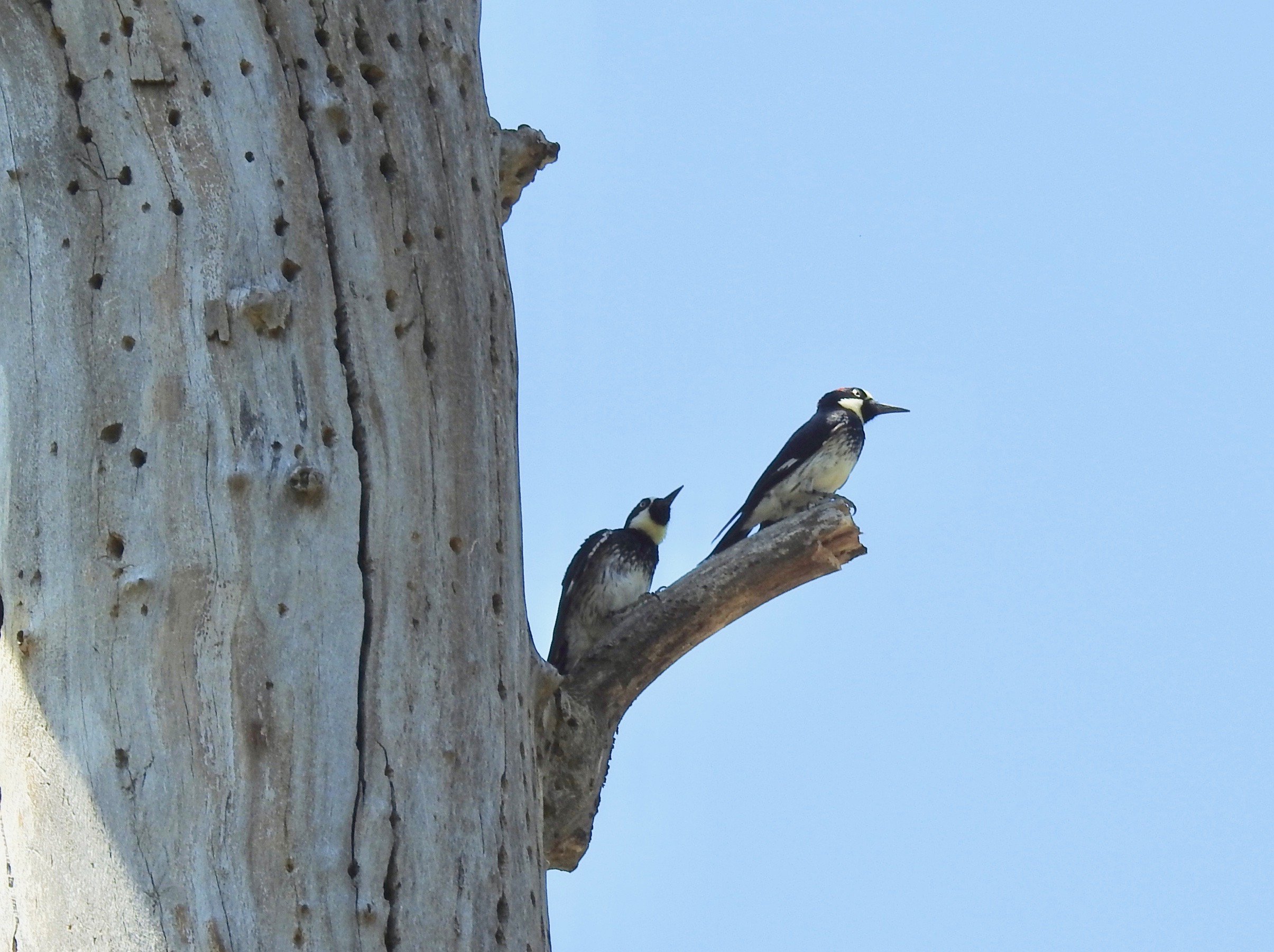 Every tree in the park had become a repository for the season’s acorn stash. 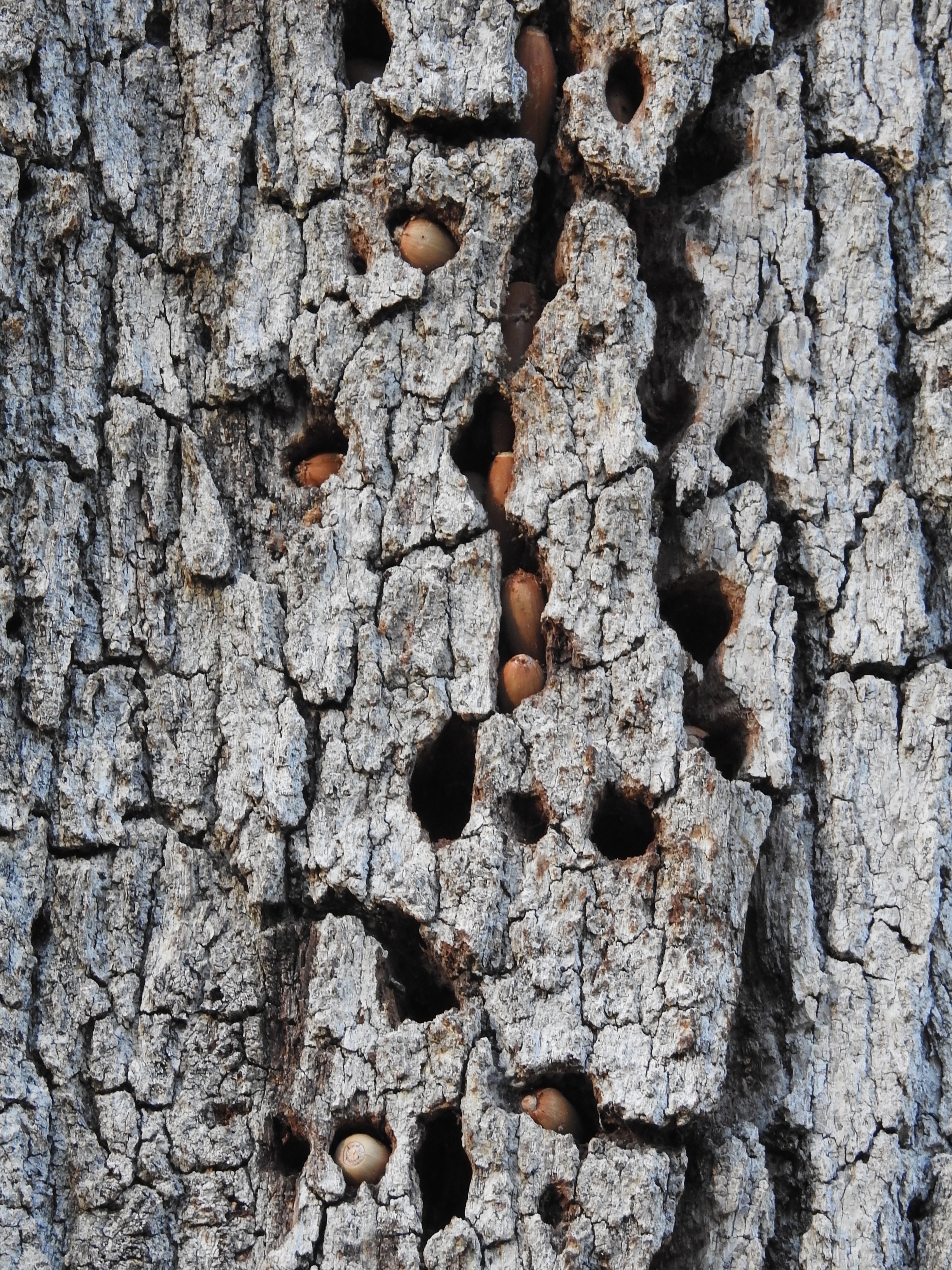 “Do behold the king in his glory, King Sequoia. Behold! Behold! seems all I can say…. Well may I fast, not from bread but from business, bookmaking, duty doing & other trifles…. I’m in the woods woods woods, & they are in mee-ee-ee…. I wish I were wilder & so bless Sequoia I will be.” ~John Muir

Sequoia Park literature recommended vehicles longer than 22 feet not attempt traveling the road closest to our campground into the visitor center due to the steep and winding entrance. Okay. Since we were just under 22 feet, we drove the very long winding road up to King’s Canyon National Park the first day to visit with General Grant before we attempted the more direct route up to Sequoia National Park.  General Grant, even after suffering damage to his canopy, did not disappoint at a height of 278 feet and a circumference of 107 feet, it’s easy to see why these trees were named Sequoiadendron giganteum. General Grant’s lesser foot soldiers were nearly as impressive. 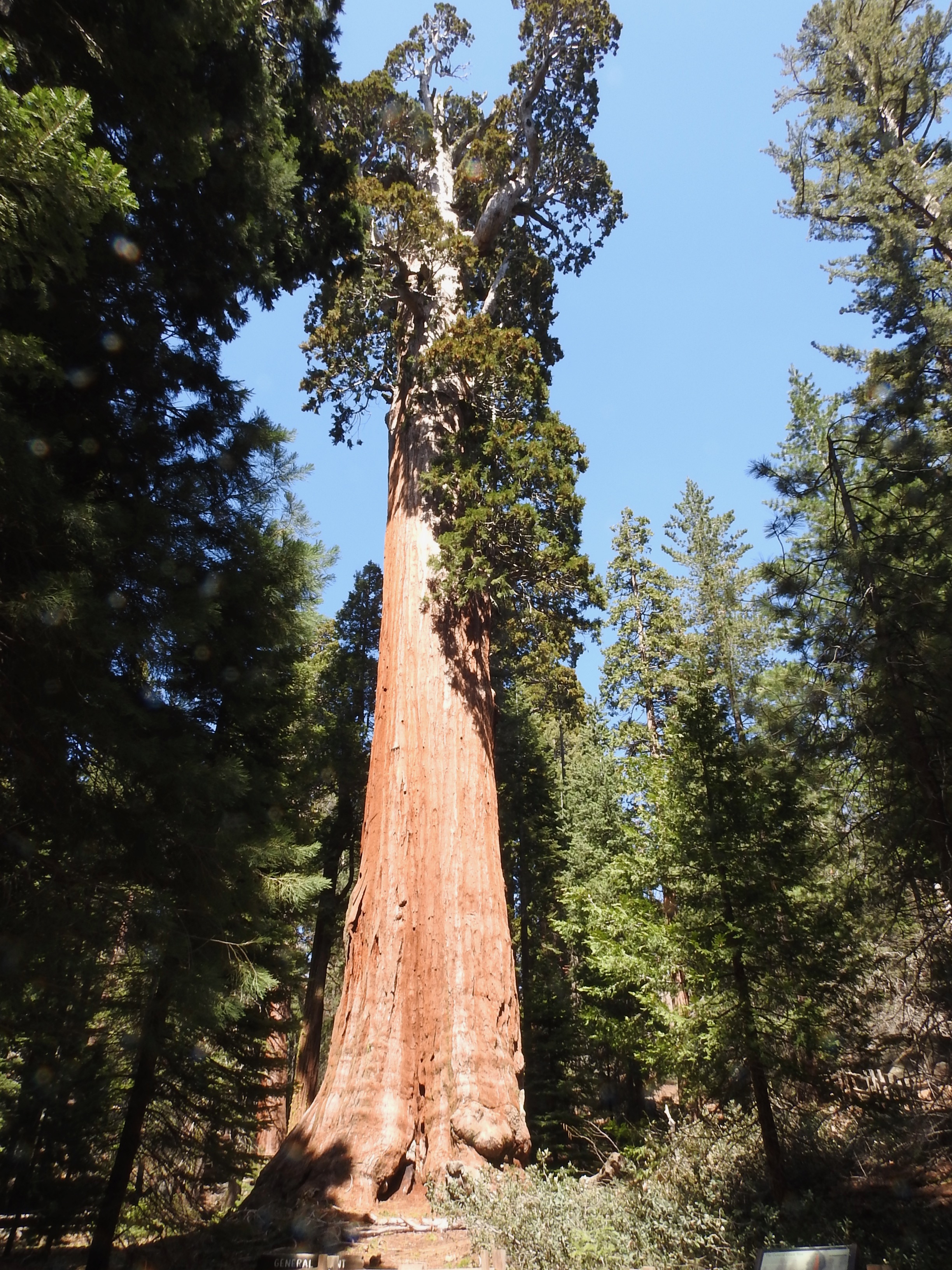 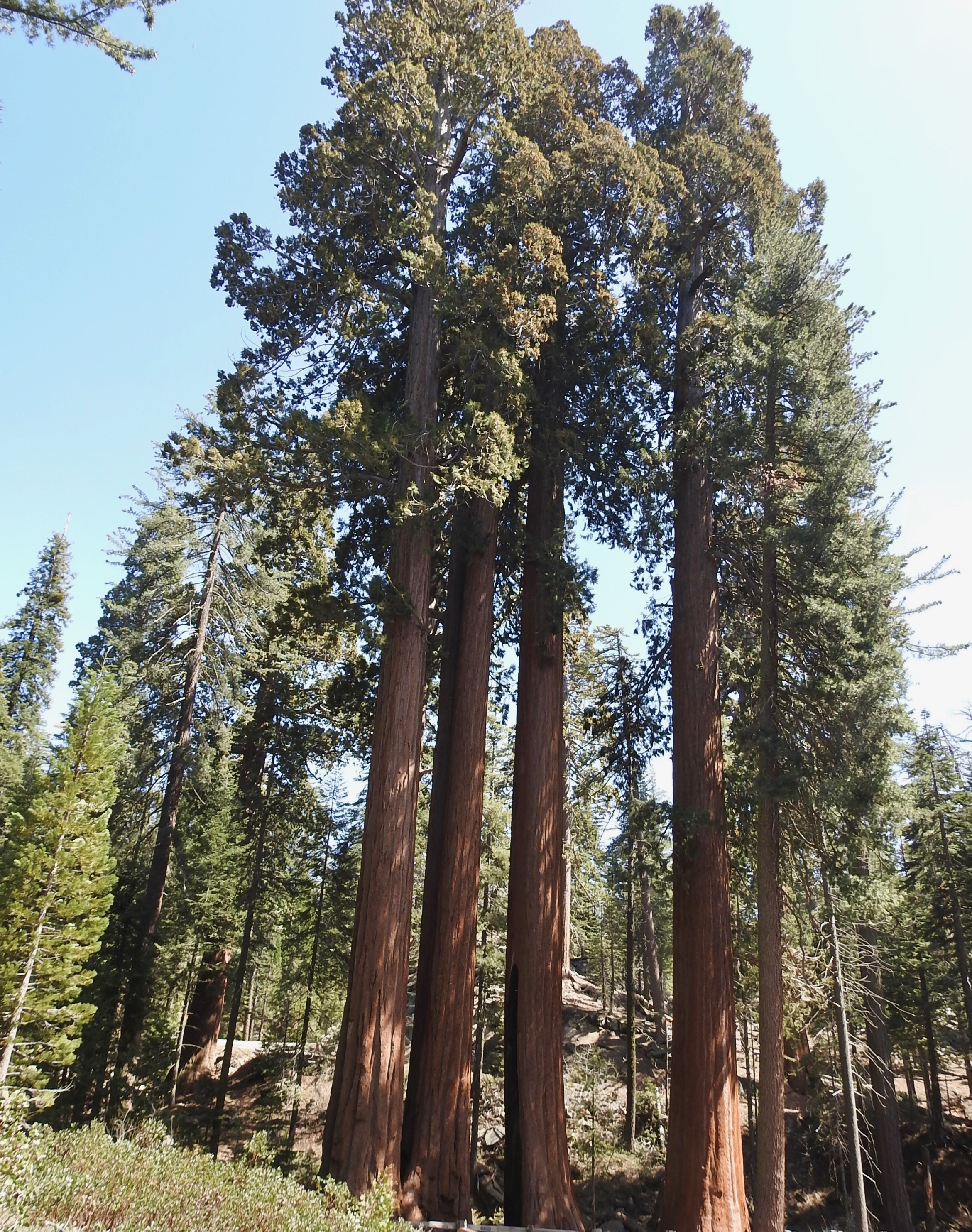 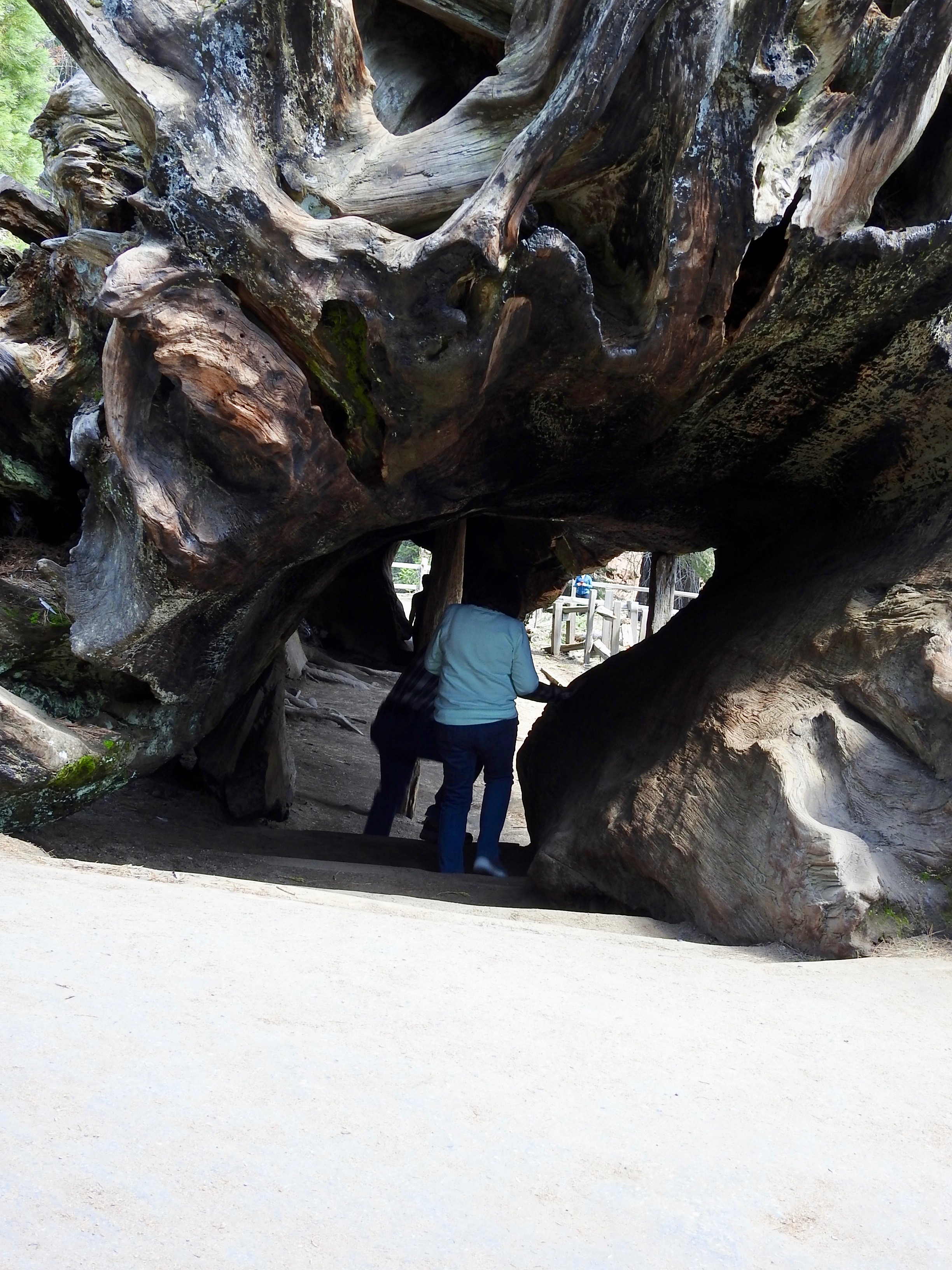 We didn’t expect large crowds at this time of year. Many of the park roads were still closed for snow and the kids were in school. We failed to account for the horde of selfie-stick wielding foreign travelers. From the sound of the chatter around us, the Russians and Chinese have plenty of our dollars to spend seeing the wonders of this beautiful country.  If only we had the concession on CruiseAmerica ’s RV rental business. 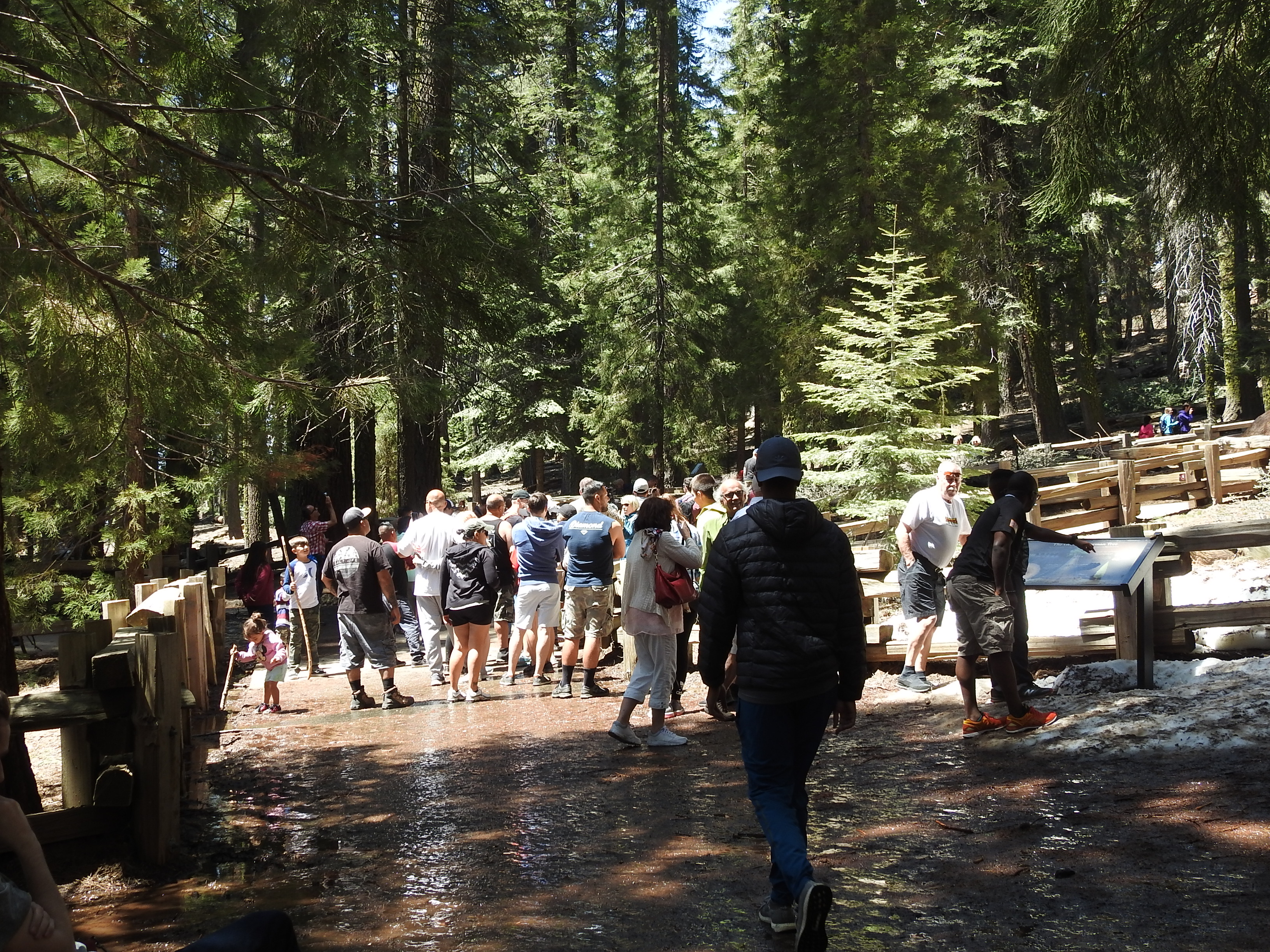 As it turned out, the road to King’s Canyon was pretty danged curvy. With that under our belt and after talking to our neighbor who’d already driven into Sequoia in a similar truck, we ventured up the hairpin-curved highway to Sequoia to visit General Sherman. Arriving at the parking lot to see the general, you see the giant standing right in front of the museum. Oh wait, that’s not General Sherman, that giant is The Sentinel, which the sign explains that although the tree is 2,200 years old, it is just an average sized specimen in this grove. It definitely looked above average to us. The general’s grove was a few miles up the road. 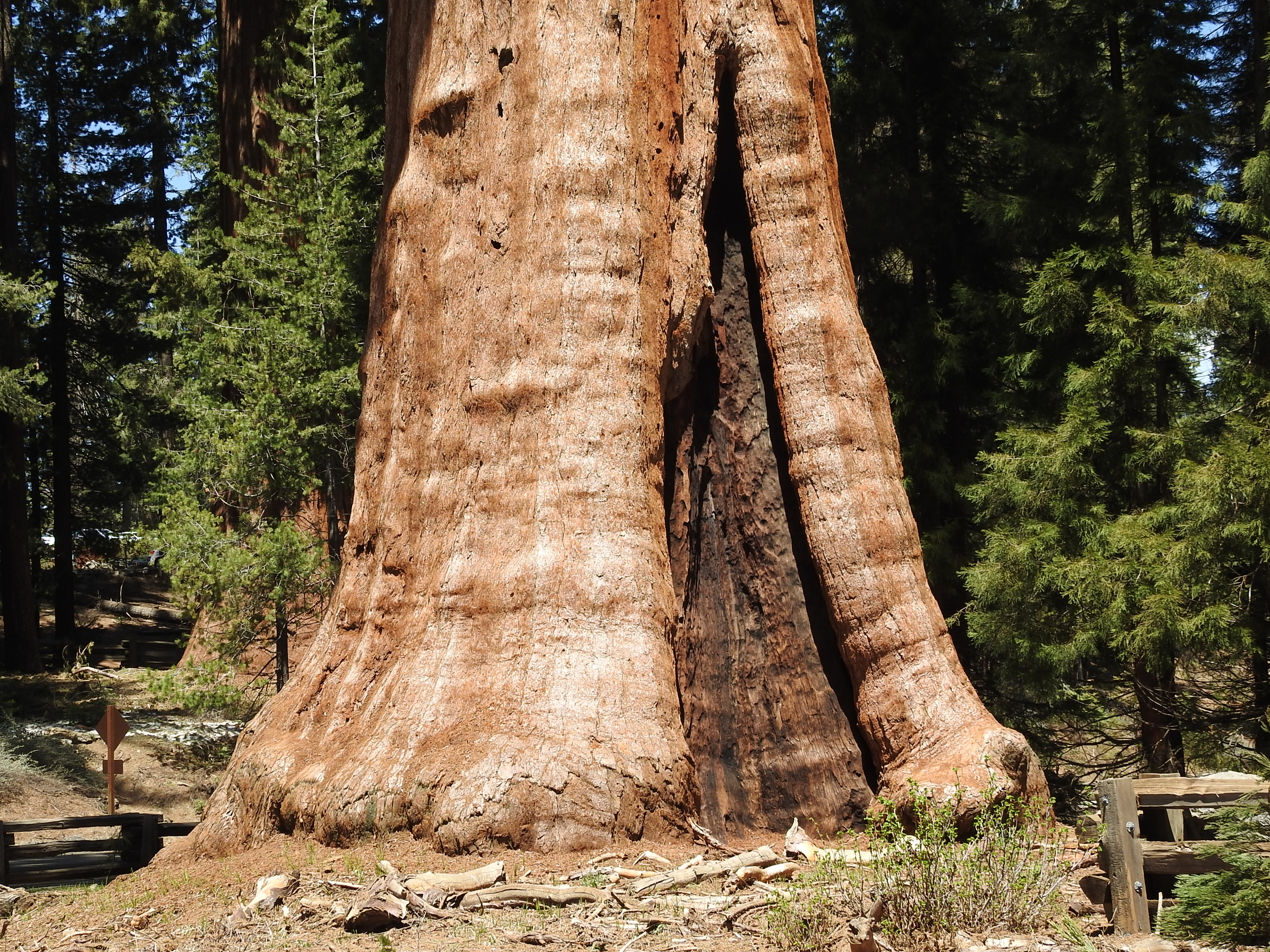 The hike to see the general was a mere half mile straight down – the easy part. Knowing that all the folks with better knees passing me on the way down would still be there mouths agape taking in the tree, I stopped short and viewed it from the “back” trying to imagine what it would have been like to wander through these woods  a few hundred years ago and happen upon an unmolested grove of giants. Apart from their size, the luster of the reddish-gold bark and the emerald green foliage atop sets them apart from the rest of the forest trees. With the sun’s rays filtering through the undersized canopy, the giants seem a bit unworldly.  Trudging back up that steep hill to the visitor center, the crowd seemed subdued and reflective to have stood in the presence of a living fossil, perhaps wondering at all these trees had witnessed. 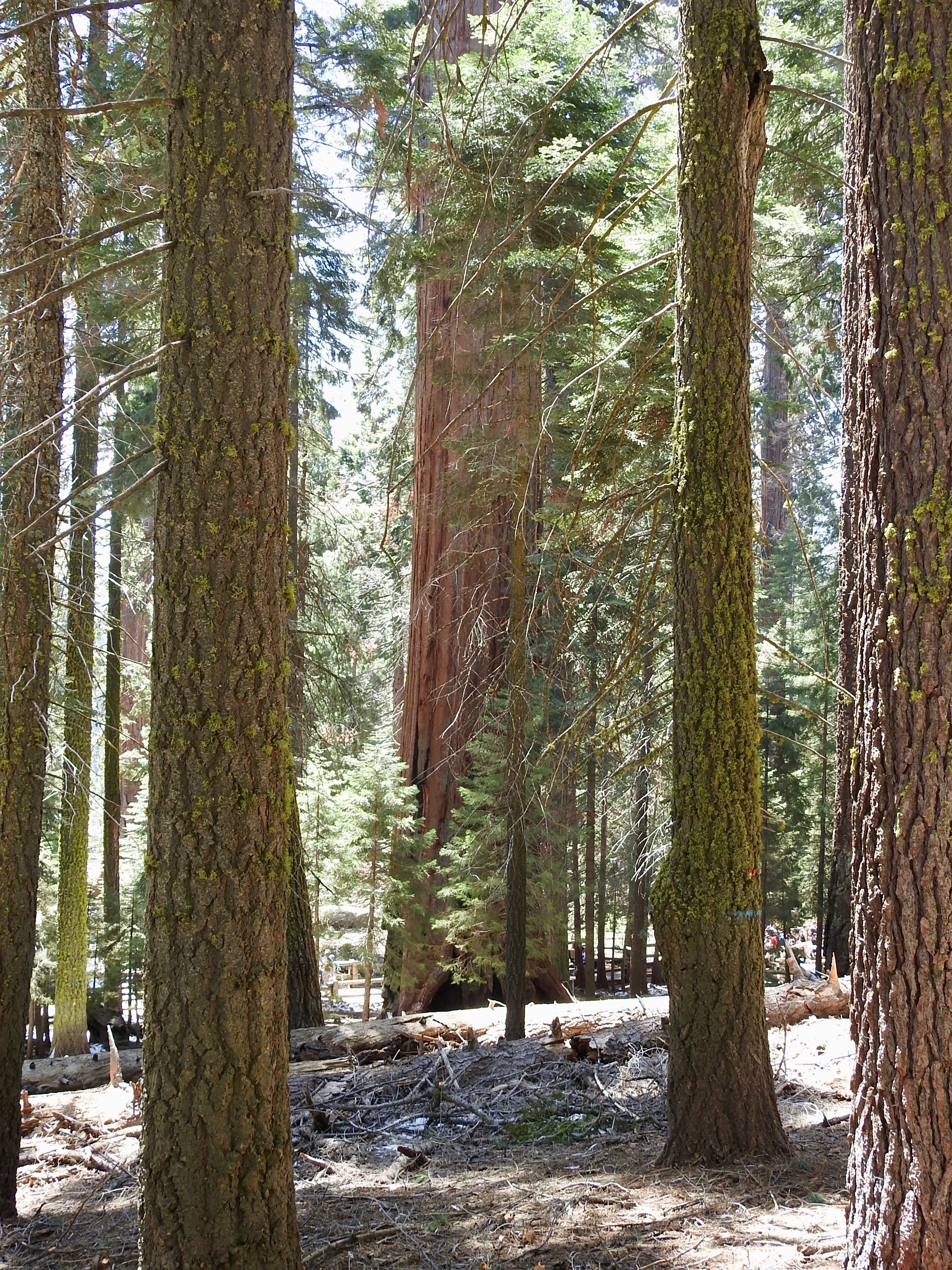 Necks stiff from looking up at trees and Pat’s shoulder sore from maneuvering the tight curves for two days, we spent the next day catching up on laundry and resting. Of course resting involves bird-watching for me. Once you quit jerking your head around at the Acorn Woodpeckers, there were actually quite a few other interesting birds hanging around the river.

Bullock’s Oriole –  With an orange orchard just across the road I expected to see a lot of orioles, but this fellow was the only oriole I saw on the campground side of the street. 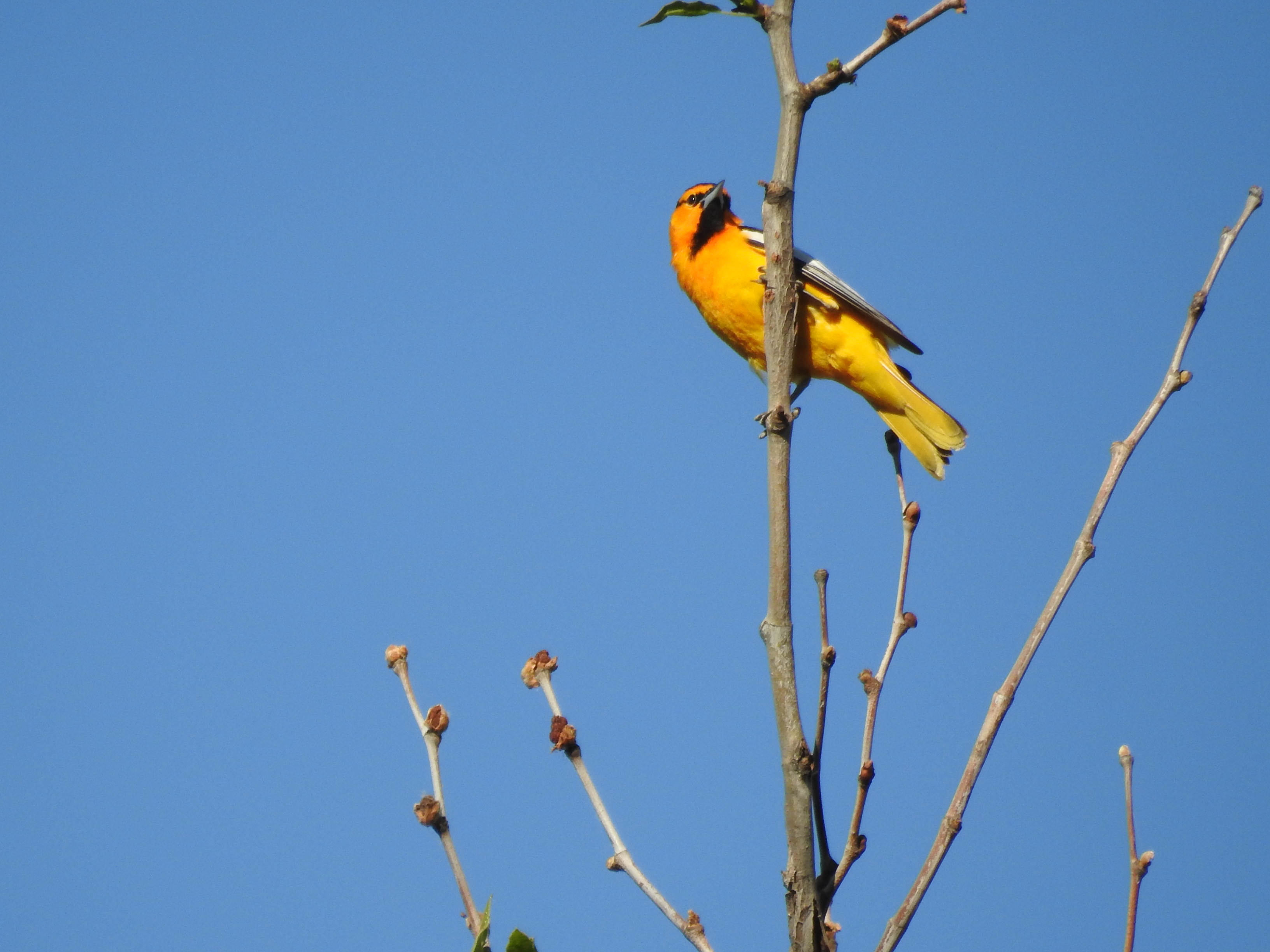 I love the way this Black Phoebe looks like our Eastern Phoebes putting on the Ritz in a tuxedo. 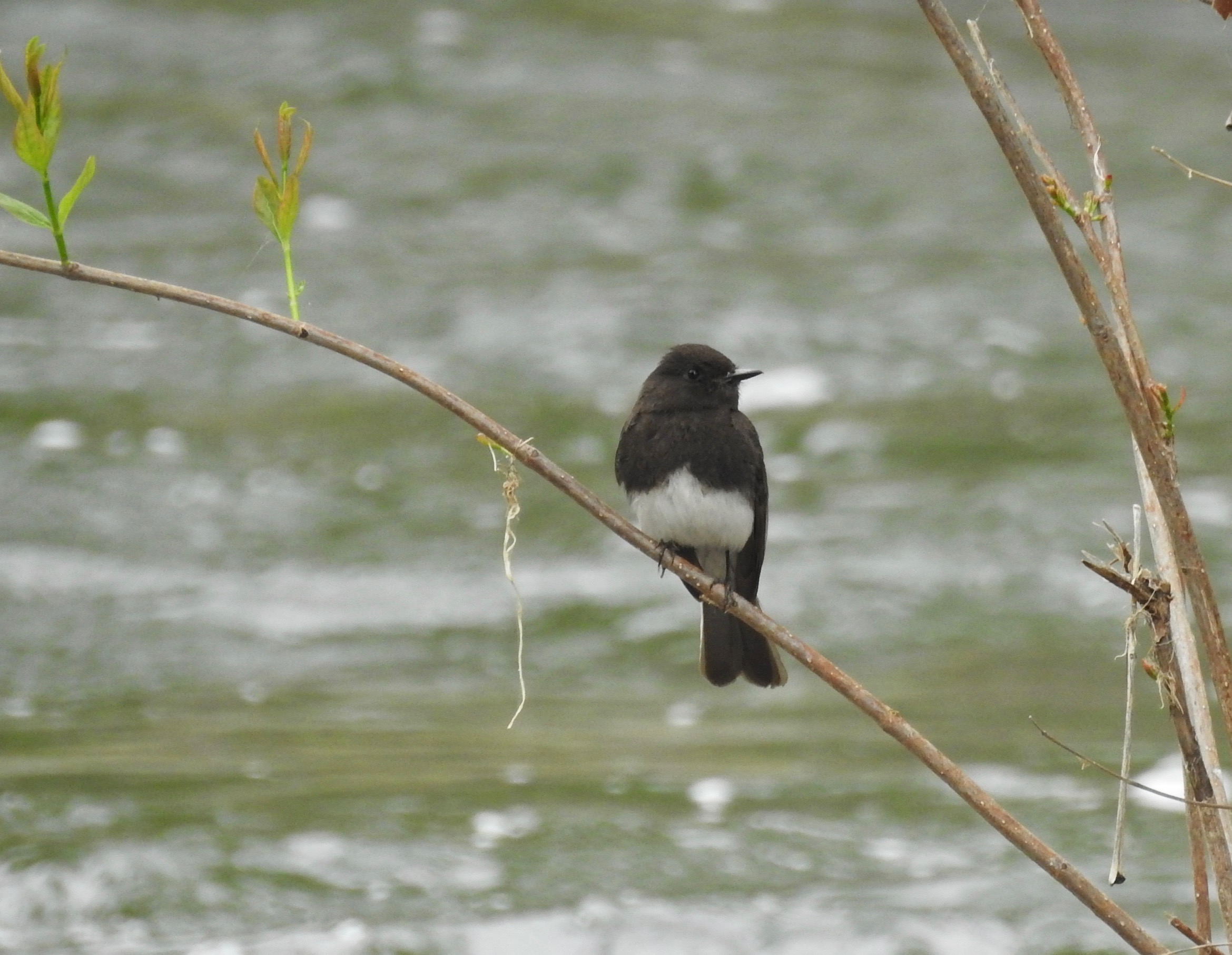 Ash-throated flycatchers migrate from the Pacific slope of Mexico and Honduras up to their spring breeding grounds, often in California. 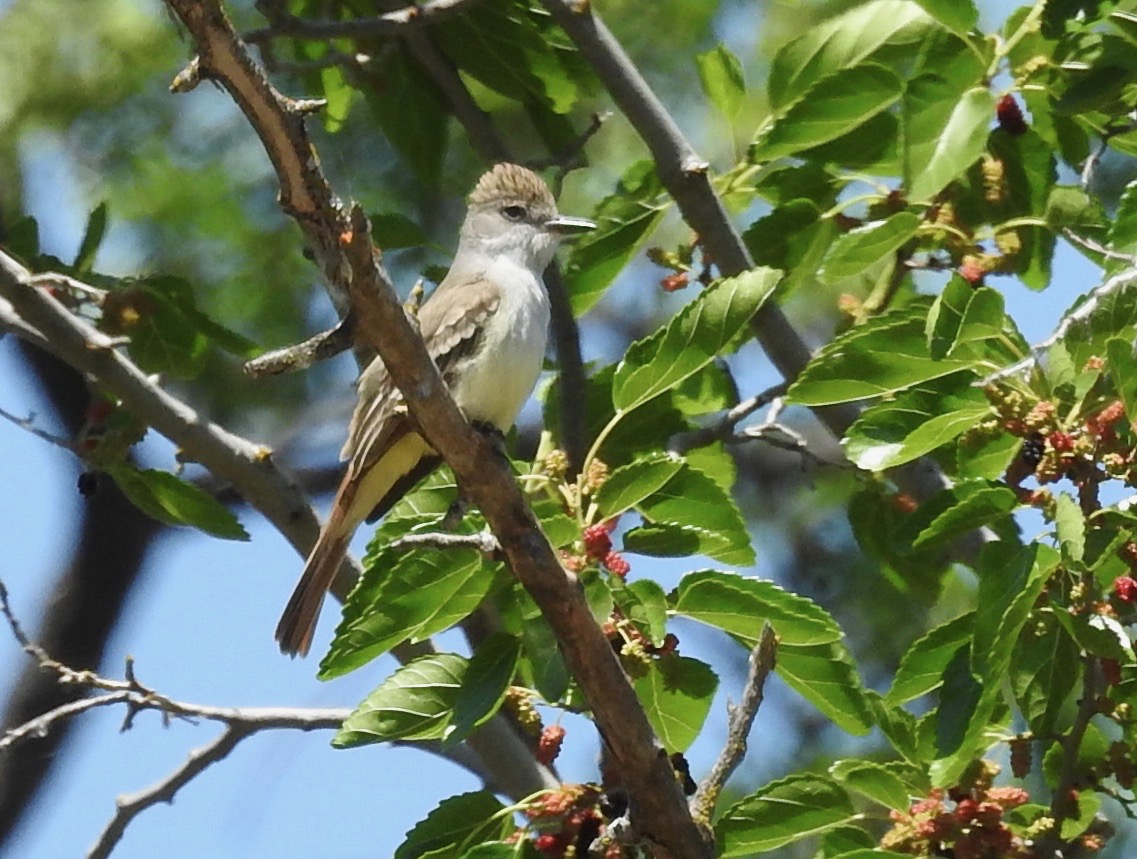 Red-shouldered hawks feed mostly on small mammals, amphibians and reptiles. This one was in a good feeding area where gophers and blue belly lizards are plentiful. 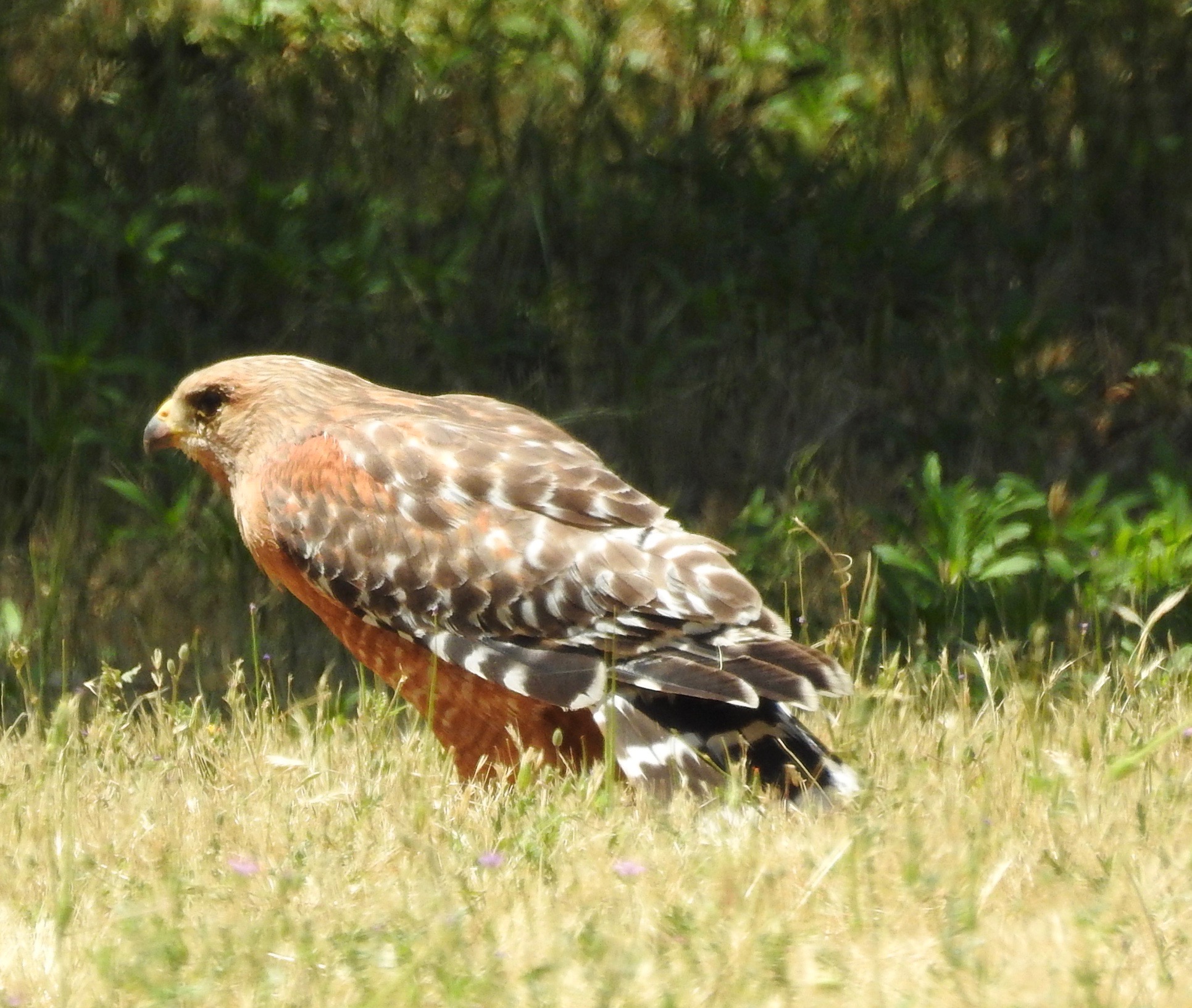 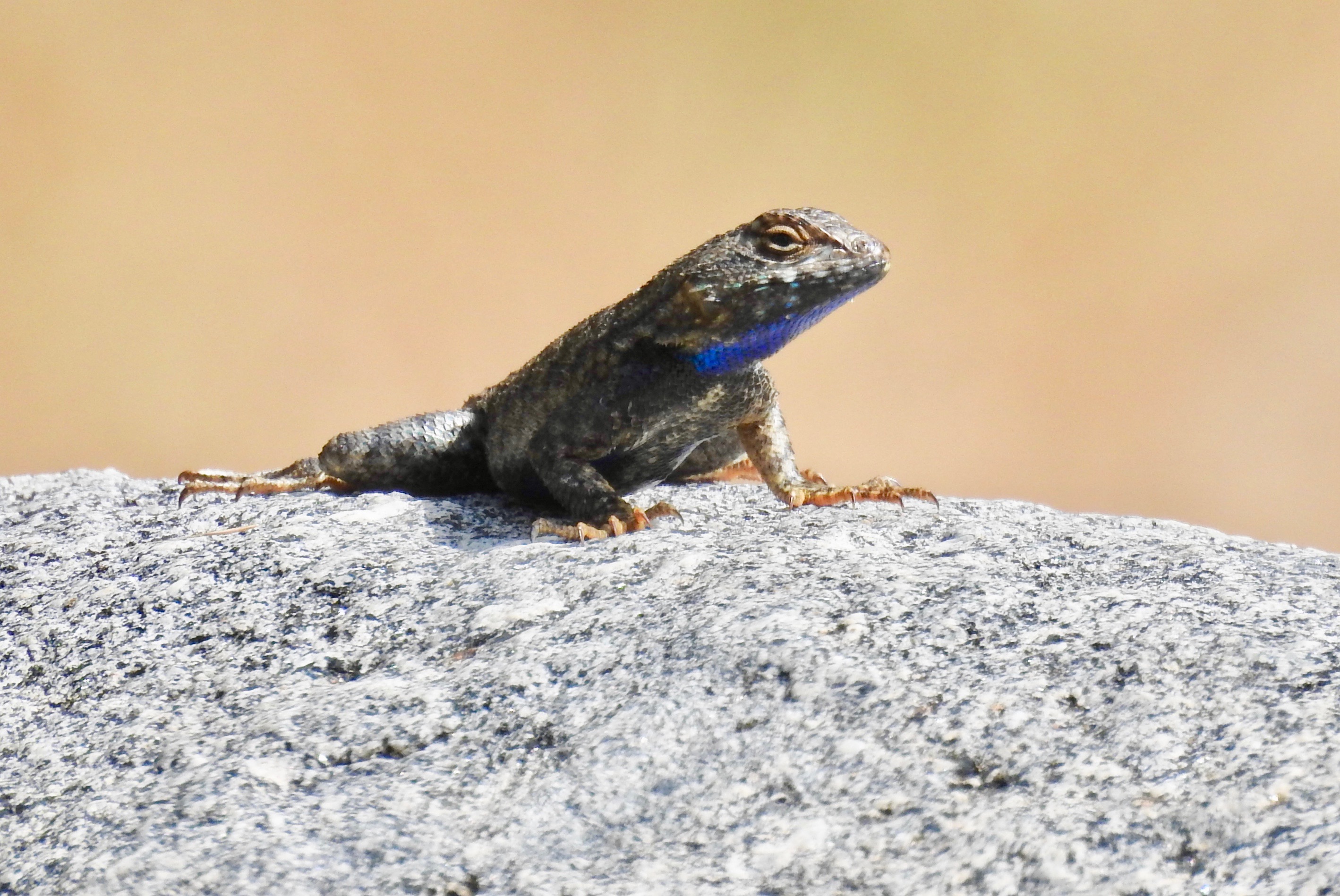 The next day we checked out Lake Kaweah, a large catchment for melting snowfall and rain from the Sierras and transported by the Kaweah River. It was built by the Army Corps of Engineers both as a flood control and irrigation for the orchards. 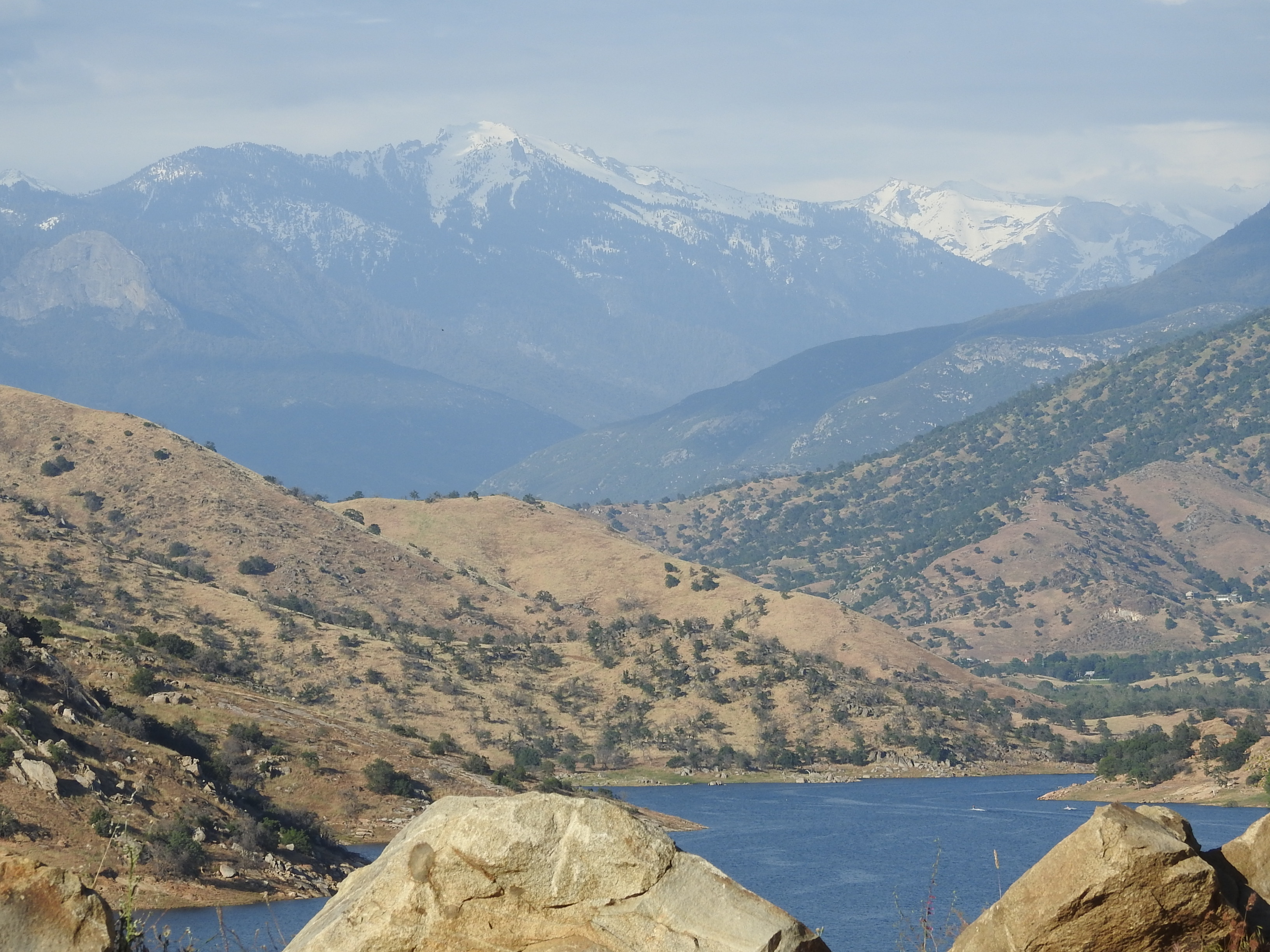 After listening to wild turkeys call all during our stay, I took Sacha on a walk before we loaded up to move on. I could hear the turkeys on the river so Sacha and I headed that way. The hen flew across the river, but when the tom saw Sacha, he stood his ground and put on a full display as a warning. I took this shot as we turned away and hit the road. 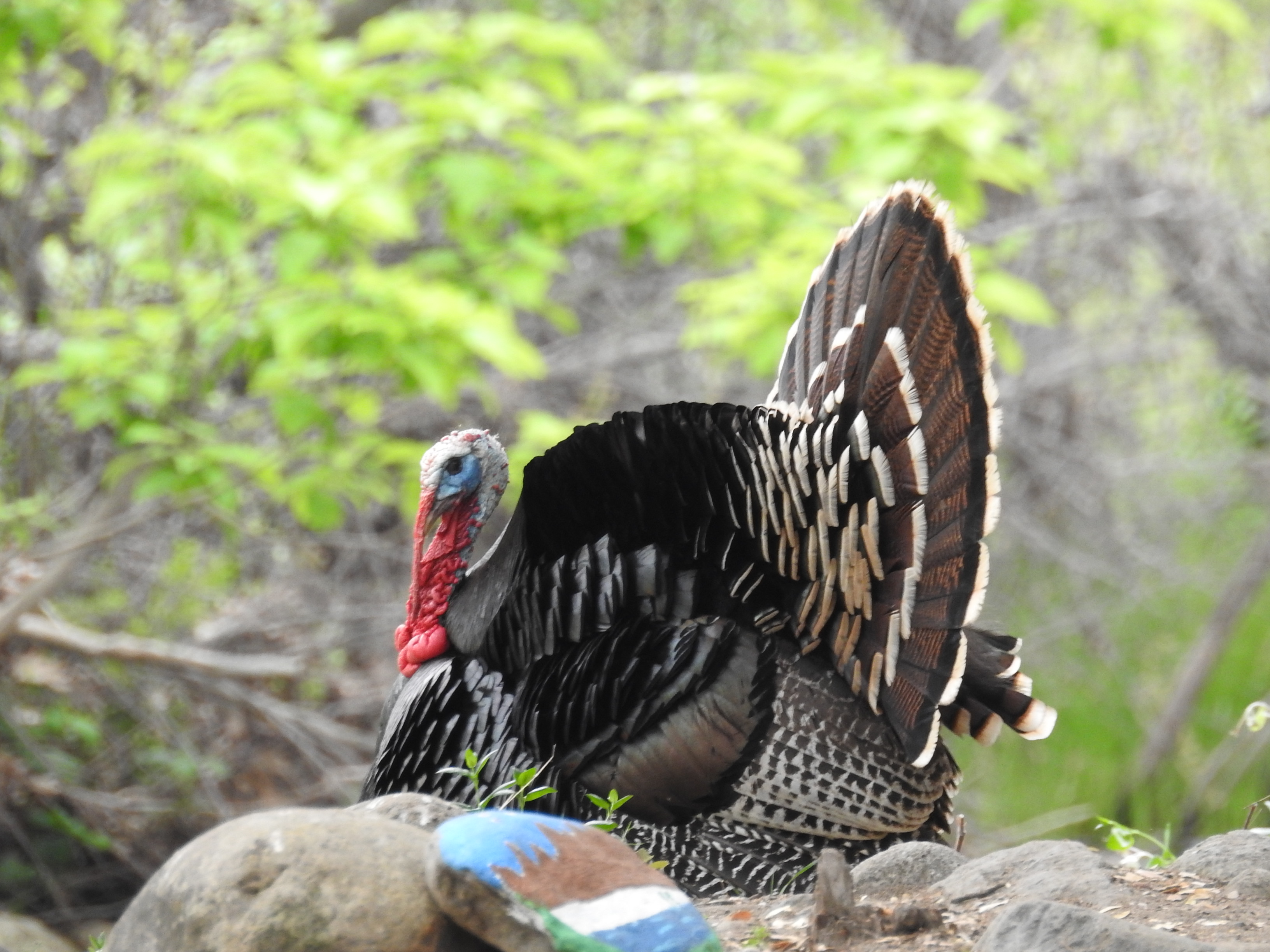 6 thoughts on “Spring Trip, Part 5: In The Land Of Giants”