Today is the last day of our first stop on the six week western half of a two part RV journey spanning three time zones, two countries, eleven states, seven famous national parks, and 6,000 miles. I’m tired just thinking about it and re-reading that first sentence didn’t help any. Unlike the last 6,000 miler to Nova Scotia, we’re trying something new, in our feeble way, to make long distance trailer travel easier and better and less taxing on Patty, our steadfast house sitter.

This new notion consists of two main parts. First, drive a good way farther on travel day in order to be able to spend more time in fewer sites along the way. You get to know each place better, and you significantly reduce the set up and break down hassles which can be pretty frustrating. No matter how tiring travel day is, you’ll still have plenty of time to recover and see the sights before you hit it again.

Secondly, instead of spending three months on the road, break the odyssey up into two, six-week segments. Store the camper for several months where you end Segment 1 and quickly drive home sans camper, staying in motels. Get some rest, catch up around the house, relieve Patty and go back when you’re ready. You pick up the camper where you left it and begin Segment 2. This saves Patty the expense of three weeks in therapy from going stir crazy in Comanche, Texas after too many months of outpost duty. It puts more miles on the truck but less on us, at least that’s the theory.

I call the first segment Spring Trip and the second segment Fall Trip. Dahna likes to squeeze my hand and tell me how creative I am.

Davis Mountains State Park (Taken by Travis K. Witt – Wikimedia Commons) The white building in the distance is the Indian Lodge built by the CCC in the 1930’s. 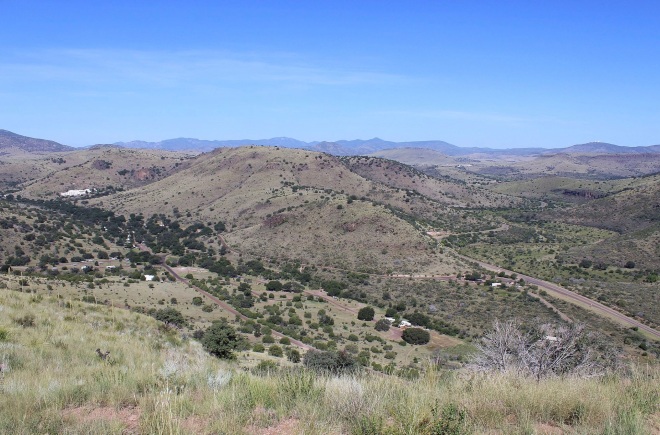 We began the new experiment on April 1st, about the time,”…showers pierce to the root,” as Geoffrey C. said to me from the 14th Century in Ms. Rummel’s senior English Class. We did a good job preparing, having gotten better and better, but there’s always a rub. This time it was bad back spasms for us both at the outset and they dogged us like nasty little stilettos each time we moved a certain way. We did make the 375 miles to our first campsite in Texas’ incredible Davis Mountains, but the first two days were spent on the tenderest of light duty.

Say’s Phoebe – These little flycatchers can be seen all over the park. They tend to perch low, jump on a bug and return to the same perch. 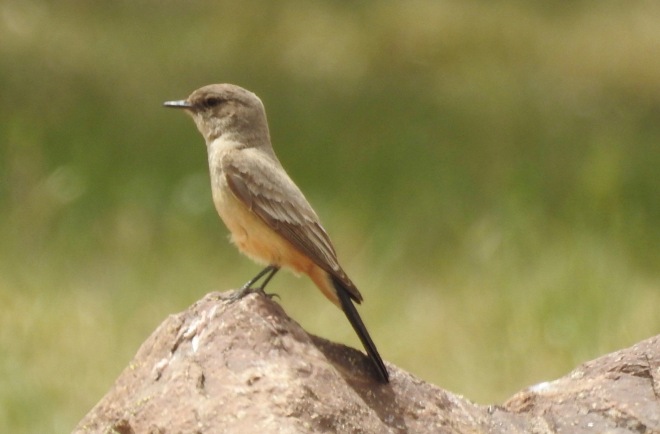 Our little town Comanche is pretty much in the middle of nowhere, as Patty knows too well, and to get to the Davis Mountains, also in the middle of nowhere, you have to go through Bum @#$%, Egypt. Out past San Angelo on the Concho River going southwest, the Chihuahuan  desert starts to announce itself as the mesquites get shorter and thinner. The grass hangs around for awhile to keep the dust down, but we know we have sand storms in our future further west. I love the way it happens. It makes me relax, and I always get a kick out of Conductor Dahna when she happily cribs a line from the Firesign Theater, “All out for Fort Stinking Desert!”

Davis Mountains – Formed 35 million years ago from volcanic activity in the region, they form a sky island in the Chihuahuan Desert. Sky islands are isolated  mountains surrounded by lowlands with a vastly different environment. Renamed for Jefferson Davis, we prefer to think of them by their previous name the Limpia Mountains, so named for the creek than runs through them as a place of spiritual cleansing.

This was our second visit to the Davis Mountains, a favorite place for us and anybody who’s ever been there. It pairs nicely with Big Bend National Park to its south which I think is Texas’ only park owned by Uncle Sam. Almost all Texas land is private, enforced in the Lone Star imagination with barbed wire, big-wheeled pickups, and Model 94 30-30s.” Our friend Ron gets animated just thinking about these desert parks and says there’s no place like them. Of course, no place in Texas is like any other place because Texas long ago slipped the surly bonds of “place.”

Go to Outer Mongolia and tell the guy you’re from any other state or country, and he’ll probably scowl and take a little step toward you. Tell him you’re a Texan, and he’s liable to offer you his daughter. I like the way all other Americans, possibly excepting Alaskans, hate us with a passion. I’m pretty sure it runs the way they hate the NY Yankees—so it’s good. You can’t see Russia from Texas because all you can see from Texas is more Texas and that’s good too. Especially the Davis Mountains and Big Bend. Ron and Lorey are mulling over another trip out there in their little pop up camper. I can just see Ron straining to keep Lorey’s blonde head in sight as she charges over hill and dale on Mission: See Everything.

Black-headed Grosbeak – Stopping Over In the Davis Mountains to Refuel Before Heading Home to mate (to the west and northwest) This handsome feminist shares egg sitting and feeding with his mate.

Months before our visit, we made reservations to go to the Star Party at McDonalds Observatory. The cosmologists there set up several outdoor telescopes and give a presentation to orient us rubes to our stellar position, thus our insignificance as if we needed any more evidence. Unfortunately, it happened the first night of our arrival and our aching backs forced our genteel southern upbringing to cancel on our behalf. It didn’t want us yelping through the talk much less screaming as we bent down to look through the scopes, probably knocking them over. Dahna smiled bravely through the disappointment and said, “I guess we’ll have to come back,” “Yeah,” I said, “The horror,” and we had a little laugh.

I don’t remember much of the second day since I slept through most of it. I was vaguely aware of Dahna “woofing” as the spasms knocked the breath out of her while she got ready for a bit of light birding. The third day I remained motionless and finished off the fourth of Raymond Chandler’s most famous noir novels and typed the first draft of the title of this piece. Dahna meanwhile ranged out further and longer on her birding trips and got some great shots including a Scott’s Oriole, a Townsend Solitaire, and a Black Headed Grosbeak, all new to her. The spasms were losing their grip.

Townsend Solitaire – Although he’s a thrush, who normally spend their time close to the ground, these birds sing prettily and defend their territory from the treetops.

The fourth day was my second favorite. It was Thursday, the best time to go to Cueva de Leon Mexican Restaurant in Ft, Davis. On that day, each week, five old codgers like me, except with talent, come out to play nifty sets of old, well-written country rock songs on the big covered dog- friendly patio. We caught them on our last visit with Sacha tied to our table next to a big and sweet old German Shepherd female tied to hers. For once our also sweet, but alpha, Siberian Husky/Akita mix rescue didn’t attack, so we ate our fine enchiladas in peace to the songs of John Prine and Townes van Zandt sung live, if barely.

This time Dahna had the Chili Relleno platter while I stuck with my enchiladas because I am a child. This is a fine restaurant and you should stop by, especially on Thursdays. We puttered around town and went back to the park to laze around, especially in my case. Dahna disappeared into an avian wonderland while I kicked back with Wallace Stegner’s  Angle of Repose, one of Dahna’s favorites. I wrote a little too, napped and took Sacha out so she could jump at a darting lizard or two. We just sort of breathed it all in until the sun set down beyond our next stop.j

Big Bend Tree Lizard slinking out of the shadows for this little noir moment. 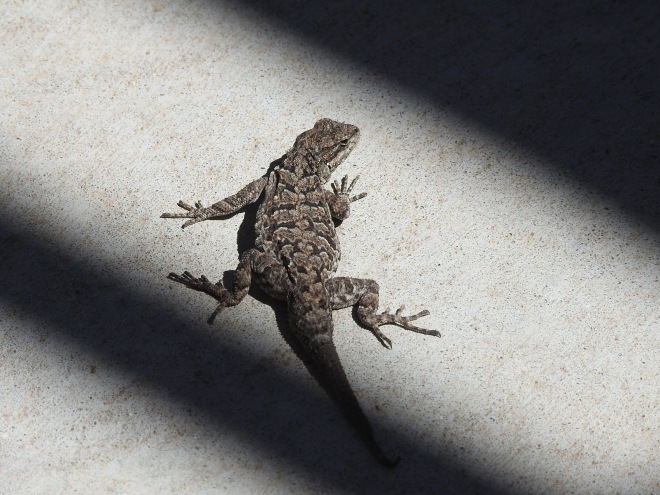 Our last full day was my favorite. We remembered that we had forgotten to bring any cash on the trip, so after a long leisurely morning we headed to Ft. Davis to get some. We got to the bank at 12:50 PM and it was closed, no doubt for lunch. So, we waited across the parking lot at a little fenced-in memorial built and maintained by the Daughters of the Confederacy. Along with a few benches and trees, it had a small two-sided wall engraved with the names of all the local boys who took up arms to defend whatever country their leaders said they were citizens of. It didn’t discriminate and included everybody up to the present. There were a lot of names on it, and I thought it nice you didn’t have to get killed to be listed on it like on some walls.

About 1:04 PM with no tellers in sight, a long-lapsed little Catholic girl, the kind I wasn’t allowed to hold hands with back in the 50s, clicked a little gear into place and practically shouted, “Jesus Christ! It’s Good Friday!” I sort of groaned, “Ahhh…damn.” Finally, I said, “We got a lot of gas in the truck. Let’s go get lost in the Davis Mountains,” and that’s what we did.

We headed back toward the park and beyond up toward the observatory. As we went by, Dahna said, “I can’t believe we’ve been here twice and never looked through a telescope.” I said, “We gotta come back.” We looked at each other, “Yesss,” she said. The little two lane took us through it for a hundred miles nearly. I rolled the windows down to let in the cool air and set the cruise to 45. It was all up and down, over and around with the desert all over everything, the granite and the sand. Finally, we settled into a long slope that wound down into the flat, and I just let the whole thing wash over me. God, I love Texas.

Scott’s Orioles thrive on the yuccas that abound in the park. They drink the nectar from the flowers and eat bugs that also feed on the plant. Their nest bags, built from woven dead yucca leaves, are often found hanging from the yucca itself.

“You’re really getting sentimental in your old age,” Dahna said. “You tear up all the time now,” she tittered, “I remember the tough Marine I married.” I said, “You only married me because I was rich and good looking.” “You’re still cute,” she said. “I’d rather be rich,” I said, “But thanks just the same, Four Eyes.” “Hey!” She barked.

We pulled into Ft. Davis a little after three and I gassed up. We started thinking about heading out to New Mexico and got up way too early the next day for us night owls. We had a new theory to test, and that meant a long, long travel day ahead.

Lazuli Bunting  – migrating through the mountains. Like all buntings they make their nests in thickets and dense chaparral. I had just enough time to get a single photo before he flitted away. 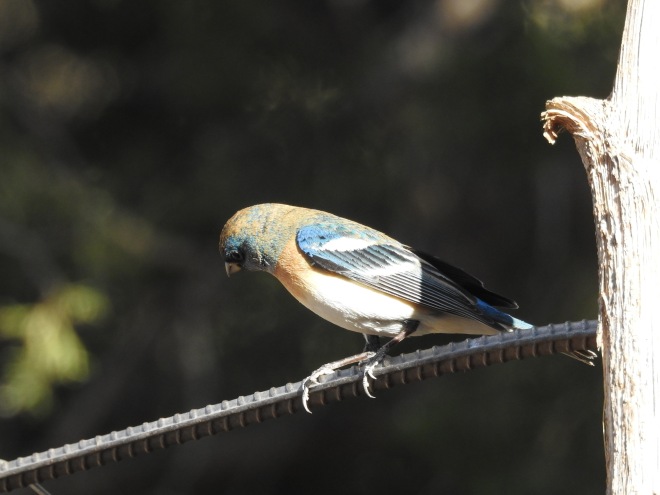 2 thoughts on “SPRING TRIP, PART 1: The Agony and the Excedrin”