Maybe you remember the old B.J. Thomas song, and maybe you’ve been to Garner. For Dahna and I, unknown to each other in those days, Garner was THE early 1960’s summer hot spot. The park was built in the late 30’s by Roosevelt’s CCC and 25 years later became Mecca for Texas kids who loved dancing the old cowboy Whip, the clear Frio River, and the cheap thrills of Mexico 90 miles away. Notorious Ciudad Acuna lies across the Rio Grande from Del Rio and was, and maybe still is, the target for gringo teenagers with wheels and shit for brains. We could buy liquor for pennies but still overpaid somehow, and we’d circle the pretty Mexican “girls” in the Sur Club or the Brown Derby. It became clear pretty soon who was circling whom, but penicillin was cheap and effective in those days, so nobody really cared. Back home there was always somebody who knew somebody and…well, it always worked out.

Once, coming back across the border in my newly-inherited ’57 Ford, about 2:00 a.m. with three of my buddies, the officer asked if we were bringing back any alcoholic beverages. I was about to naively say, “No sir,” when Jimmy piped up, “Yeah, but you’ll never find it.” You’d be surprised how fast two cops can dismantle the interior of a car. As good as they were, they were too dumb to frisk Jimmy who had a half pint of Bacardi down the front of his Levis. He was too loaded to be of much help putting my car back together, and it probably took us at least an hour but I don’t remember for sure. Jimmy lived into his late 60’s which is far longer than he had a right to.

Okay, so we’re all loaded up. The pickup’s gassed up with the kayak lashed on top, the RV’s packed and battened up in travel mode, and Sacha’s a little nervous in her comfy backseat. Neighbor Ray has been instructed to shoot anything that needs shooting. Allan has the house keys and is the master of the cats’ domain—not that there is anything wrong with that. The truck is pointed at the cattle guard, and we’re about to start our 14 day birding safari headed for points south. I looked over at Dahna and said, “This would be a great time for you to remember whatever it is you forgot.” She looked out the windshield and replied, “I guess you’re going on this trip without sunglasses.” A few minutes later, we were underway.

We got to Garner a little before 4:00, and there was a long, slow moving check-in line in the big, sleek headquarters building that looked inside like the lobby of Trump Tower, but more tasteful. This was a huge change from the old days when there was no headquarters, first of all, so you didn’t have to check in, second of all. We’d drive in and just park somewhere on the grass and eventually a ranger would come by and hit us up for two bucks and stick a receipt in the wipers. It was always good form to wash off the Ciudad Acuna evidence from the tail fins before he got there. There, in the summer of ’64, we were hot to trot and the skies were not cloudy all day like they were this time.

The weather wasn’t great when we left, but the forecast was good. Not so the forecasting. First it was fog, then fog with mist, then mist with drizzle, then cold with drizzle, mist and fog. I wasn’t worried though because Garner is Shangri-La as everybody knows and everything’s perfect there. I was worried about the gas, however. This new camper is bigger and heavier than the old retro, and the kayak on top combines to turn our normal gas guzzling truck into an aerodynamic brickbat of Godzilla proportions. Divide 210 miles by 30 gallons to get some idea. To be fair, there were lots of hills.

Unlike Dahna, I was too slow-witted to walk Sacha when we got there so had the pleasure of standing in line for over 30 minutes waiting to check in. I wondered, ‘Who the hell are all these old farts? Don’t they have jobs? Jeez!’ Finally, I stood before the lady ranger and listened to her sad story while she assigned us the worst spot in the park. She was worried about her son, a naval aviator trainee now assigned to the Naval Air Station in Corpus Christi. She probably imagined the kid splashing his trainer jet in the bay like John McCain did 50+ years ago.

Cypress Trees on The Frio River 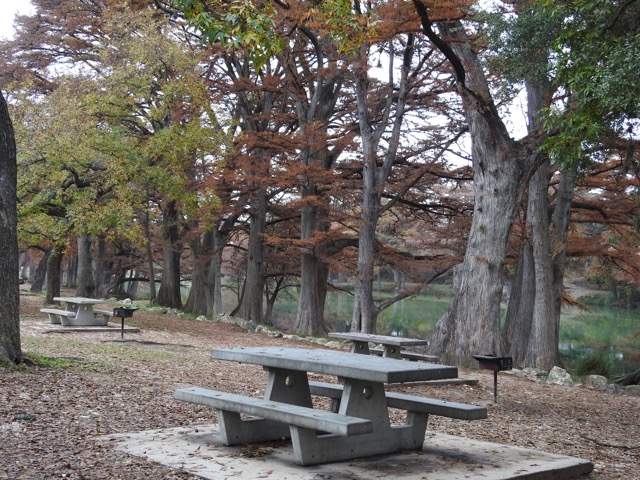 Our spot at Garner wasn’t really the worst. I’m sure plenty of people would have loved it. Hermits, for example. I’d like to know more about the hermit community but not by being one. I guess some people drag around a three ton RV in order to get away from the madding crowd, but that’s really not it. The purpose of RVing is to get out of your nice house so you can stay in a pinched rattletrap among lots of PEOPLE YOU DON’T KNOW. It ain’t camping! You pay a pretty high price in effort and money to meet friendly and intelligent folks who don’t give a rat’s patooie if you live or die. It’s liberating, truly. You’re not supposed to be lonely. You’re not getting away from it all if you do it right.

We were lonely for three days in our huge and forlorn “Frio River” loop. The park was half full but not where we were. Looking left or right through the drizzly fog, you saw only empty spaces. We drove down to the heart of our old memories, the beautiful, deserted stone pavilion where we danced all those years ago and took a quiet turn or two through the Whip. We reminisced about the corny songs we loved to dance to on the old jukebox, like “Black Land Farmer” and “Fraulein” and “Last Kiss.” Well, you had to be there. In the early ‘60s I mean. 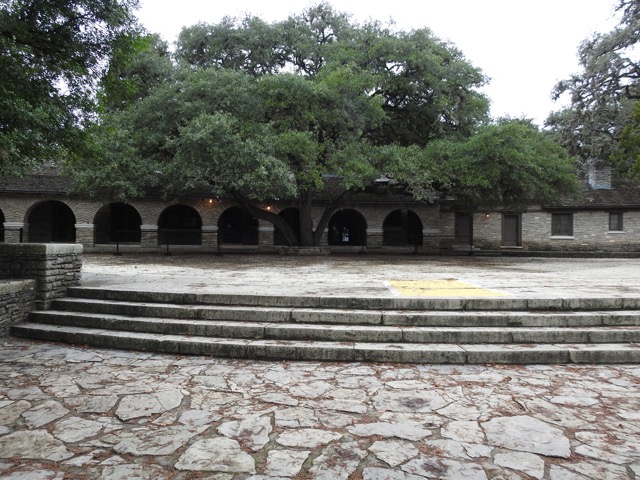 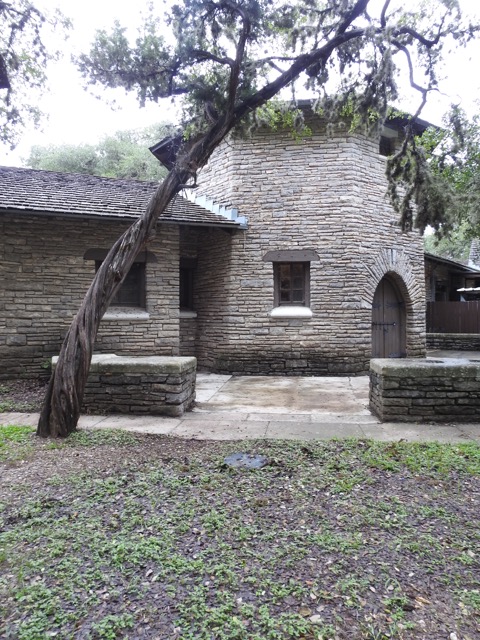 Dahna did see and photograph some cool birds such as a golden fronted woodpecker, some pine siskins, a yellow-rumped warbler and a pair of Egyptian geese. The place was full of huge jack rabbits that looked like long-eared dogs through the fog and a flock of wild turkeys trotted by through the mist. The best thing, critter wise, was our dawning discovery that our rescue girl, Sacha the problem dog, returned once, if not twice, to the shelter is, in fact, a sparkling gem.

Me with Sacha inside a Cypress 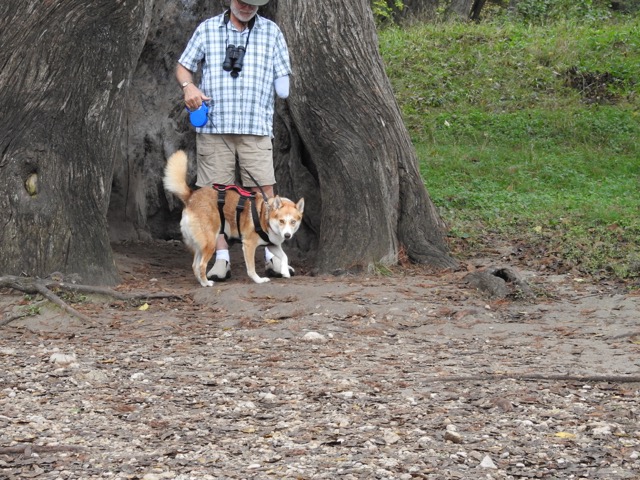 Yesterday, as we marveled at how she combines the best traits of both Daisy and Libby, two of the world’s greatest dogs of all time, Dahna wondered aloud in hushed tones, “Is this the perfect dog? Did Daisy send her to us?” We are smitten. 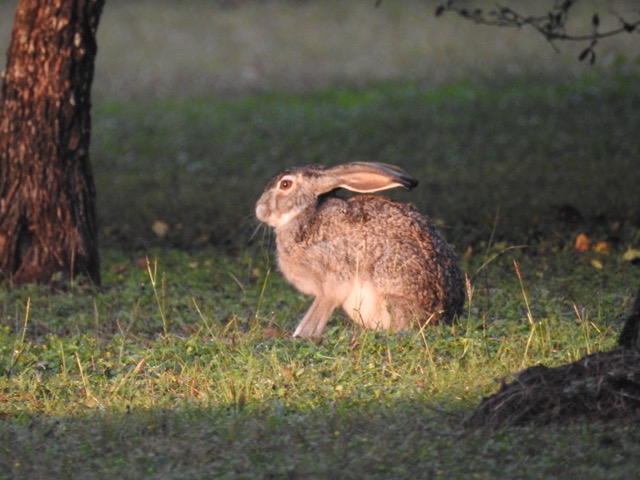 The crappy weather never let up and for the first time in our lives, we were glad to get out of Garner State Park. We got a good early start and the hookup went smooth as silk. Our spirits were improving at the prospect of sunny skies down on the border 260 miles south at Falcon reservoir. It looked like clear sailing but, as you know, we’re the Branyans and the Simpsons have nothing on us. I won’t say it was the worst day of my life but… 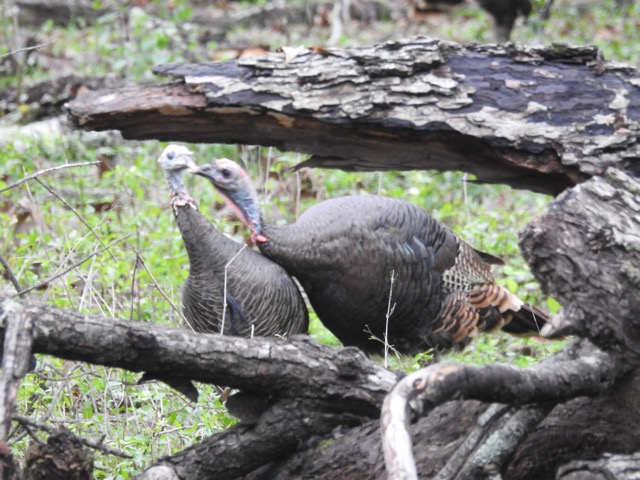